For the reasons detailed in the chapter Carto-Guiding we have opted for GPS-guidance.

GPS devices are distinguished by, among other things, the following features:

A GPS with vectorial cartography seems indispensable to us. It allows us to navigate as we want even outside our planned ROUTE. If a deviation occurs, we continue to guide ourselves with precision. The same goes for visits to towns where you can see all the streets with their names.

Then in 2012, we added a GARMIN MONTANA 650T. The GPSmap60CS going from Martin's handlebars to Betelgeuse's. Now it's two MONTANA 650T, each one can follow the route live.

Starting in the summer of 2012 on a trans-European hike, we will pass through the Czech Republic. The cartography of our old GPSmap60CS was very poor in this country.

Now the new more detailed maps are only available on memory card… the GPSmap60CS does not have a memory card reader.

Moreover this hike was spread out over 7 weeks instead of our usual 3 weeks, the number of days of itinerary was not going to hold any more in the memory of this good old GPSmap60CS.

Moreover, in our previous hikes Betelgeuse liked to follow each daily route on paper maps that we printed in advance. The importance of our summer-2012 hike made the mass of paper unthinkable! So we were looking for a new GPS.

Under study, GARMIN once again proved to be the most efficient with its new MONTANA range.

We chose the highest model of the range, the 650T, for 2 reasons:

During the hikes in Europe in recent years, it had been nice to have a routable map in the GPS. It was the carto "MetroGuide Europe V9".

This series has disappeared from the GARMIN catalogue but has been replaced by the "City Navigator Europe NT 20xx".

It's really very practical when riding a bike. The smallest roads are there. Many big roads are also there. Almost all the streets of the cities are present.

The MONTANA 650T is big… it takes up space on the handlebars.

The FIX of the MONTANA 650T is still very fast (much better than on the 60CS).

Its RECEPTION (sensitivity of the antenna to satellite reception) is excellent (much better than on the 60CS which was already good). The test in hardwood environment is not significant given the weak vegetation in April 2012. On the other hand in relief or urban environment it is fantastic. 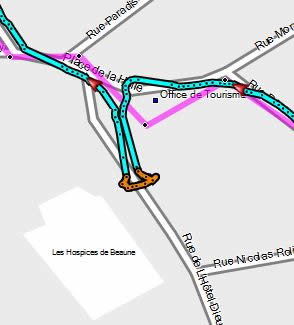 Passing through the Hospices de Beaune. Parked just in front of the Hospices under the canopy of the tourist office. The 60CS has simply lost all satellite reception.

Here is the image of the track of the MONTANA 650T. In the track (in blue) are selected all the points linked to the parking from 9h36 to 10h04, that is to say during 28 minutes, the associated link vectors appear in orange..

We can see that the dispersion is extremely low.

The MONTANA 650T's transflective display requires good orientation if it is to be seen without backlighting (preferable for autonomy) in all weather conditions.

Under the sun no worries, luminosity, contrast, colors all is perfect.

Under a cloudy sky, there attention. The lack of sunshine drastically reduces the brightness of the display. But it remains correct under one condition… orient the screen… to see your face or body! Indeed the sun is no longer there to give a bright display but the clouds are clear enough to provide redhibitory reflections. So by correctly orienting the screen towards you, your own (dark) silhouette hides the sky and its harmful reflections.

In cycle touring, with daily rides of 7 hours on average, stop included but GPS always on, the MONTANA 650T battery level has never fallen below 53% (this with backlight off as described above). The autonomy is super excellent!

Our itineraries pass through canals, paths, very small roads and often take cycling tours. So no GARMIN map allows realistic automatic routing. Therefore all our itineraries are made of points with direct links as the crow flies. For the guidance and the mileage forecast to be relevant, a multitude of points are of course necessary which allow to follow the curves of the routes taken.

For long and/or winding stages the number of points sometimes exceeds 250. Be careful there! On the 60CS the limit of 250 points was clear: if one tried to export to the GPS a route of more than 250 points then, during the USB transfer, the GPS emitted a beep and displayed a truncated route message.

With the MONTANA 650T it's the big blur. At the technical supports, nobody (even at GARMIN) could tell me what the limit was. So I tried to introduce a 350 points route… No error message, great… and on the MONTANA screen the route is well displayed from end to end… re-super. Ok, except that in the field during the actual guidance everything stops at 250 points.

Luckily for my wife's 60CS I had cut out the main routes as usual. So after the first bugged step, I was able to use my mini-PC to recover the sliced routes of the 60CS to inject them into the MONTANA 650T to replace the big ones that were unusable.

With direct link routes as the crow flies the 60CS makes a super simplified zoom on every change of direction (every point of the multitude of points). The complete vector map disappears, only the vector where you come from, the vector where you are going, the junction point between the two, plus possibly some of the main elements of the carto routes.

On the other hand, disappointment with the MONTANA 650T; in this mode (thus excluding automatic routing) no zoom is used. Only the sound signal remains.

The touch screen of the MONTANA 650T is very handy even with winter gloves (if not too big and with a bit of plasticized areas at the fingertips of the gloves).

The camera of the MONTANA 650T is of low quality, but it is very practical because, totally waterproof, it allows you to take pictures in the rain.

Previously I had 2 cameras, a compact with optical zoom for dry weather and another waterproof compact with digital zoom (less result but better than nothing) for rain. In this last case the optical zoom camera stayed of course quietly in the handlebar bag.

Now with the MONTANA 650T I have only one compact. It's always the same thing to take for the weight (compact + charger), and when riding a bike it's the hunt for the gaspi-weight !!!

Great device that has improved with each firmware update.

ATTENTION to a vicious, route-blocking bug:
This has been active in several firmware versions.
I had routes created under BaseCamp that refused to launch on the GPS.
Indeed in the GPS route list, the selection of certain routes remained inoperative, one did not pass as usual to the next screen with the visualization of the whole route on the map background.

ORIGIN :
It turns out that if two successive route points are identical (different names but identical coordinates)… the MONTANA does not like it and the route is non-functional. This is noted for routes in "Direct - As the crow flies" mode (to be studied for the other modes).
The good old GpsMap60CS swallows these itineraries without blinking, but the young MONTANA has a more fragile stomach!

SOLUTION :
To get the MONTANA out of its indigestion, you need to be on BaseCamp:

The GARMIN GPSmap60CS is an excellent instrument. Currently it is sold in its new reference GPSmap62.

It is attached to the handlebars by means of the optional bike mount.

On this last parameter, it should be noted that we now store an entire hike without worrying about this limit:

Waypoints are automatically created at each vector junction. But they are useless for guidance.

The guidance works perfectly without Waypoints, the vectors (route-ROUTES) are sufficient.